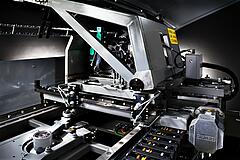 Ware handling itself begins with the pusher system, which transports containers from the dead plate to conveyor belt. Earlier systems involved a combination of electric drives for rotational movements and a pneumatic cylinder for linear movements. These are unable to ensure the accurate positioning of containers on the conveyor belt. Problems during subsequent transport are the consequence, possibly causing extensive production losses and additional work for the operator. Due to the relatively simple configuration of these units, the pusher’s motion profile consists only of a single rotational movement after the pusher fingers have been positioned between containers.

Some years ago Heye has launched the new high-speed pusher type 2158. The optimized motion profile results in a highly accurate container positioning on the conveyor belt. Combined with Heye’s high-end Ware transfer type 4220, the efficiency can be increased by up to 2 percentage points.